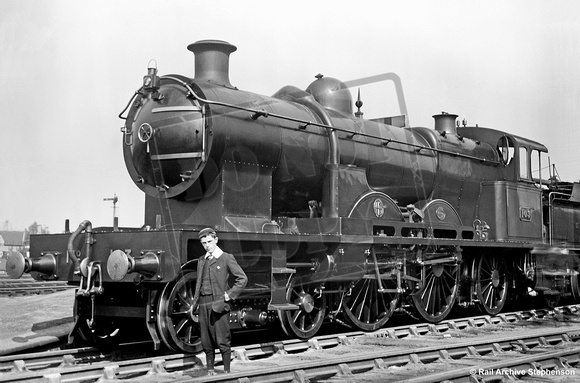 Peter Kerslake says "A young lad poses for the camera in front of what looks to be a brand new French Compound 103, the image dated as from 1905, the year that the locomotive was acquired by Mr. Churchward for the Great Western Railway in company with sister engine 104.
Both locomotives ran without names from 1905 until 1907 when 103 became "President" and 104 "Alliance", their early workings on the G.W.R. taking them from Paddington down to the Westcountry on Top Link passenger services during which much valuable information was provided by the three locomotives which was put to use by Mr. Churchward when he devloped his renowned "Star" class, destined to be the forerunners of his "Castles" .
"President" remained in service until March of 1927, with "Alliance" being withdrawn in September of 1928, the earlier "La France" having already been withdrawn in October, 1926"