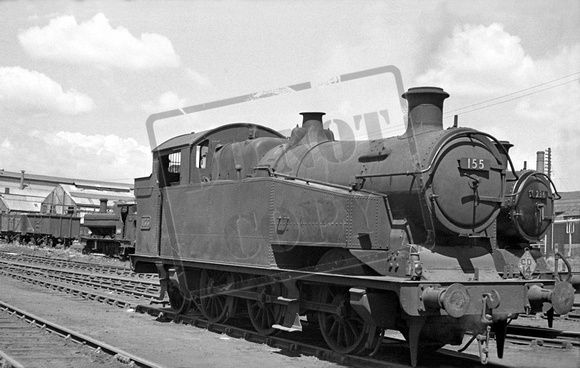 Cardiff Railway 0-6-2T at Cardiff East Dock Locomotive Depot
In 1922 the GWR took over 36 locomotives from the Cardiff Railways stock, but only one 0-6-2T, four 0-6-0T and two 0-4-0T survived the 1930s. This is the single 0-6-2T, No. 155 (built 1908), very 'Swindonised' as were almost all the locomotives of the various independent South Wales Railways absorbed by the GWR. The location of Cardiff East Dock Depot is hard to localise precisely on modern maps, as the whole area has been so thoroughly redeveloped in recent times - the Depot was located between Bute East Dock and Roath Dock and a great road roundabout seems to occupy its site now. In the 1950s it was coded 88B in the Cardiff Valleys Division, with an allocation of 70 steam locomotives:- 30 0-6-2T and 40 0-6-0T, but in 1962 it took over the remaining main-line steam stock from Cardiff Canton and remained active until August 1965. [Visiting the Depot informally, I was met with typical Welsh friendliness; the men placed this engine specially for me to photograph].
Powered by ZENFOLIO User Agreement
Cancel
Continue