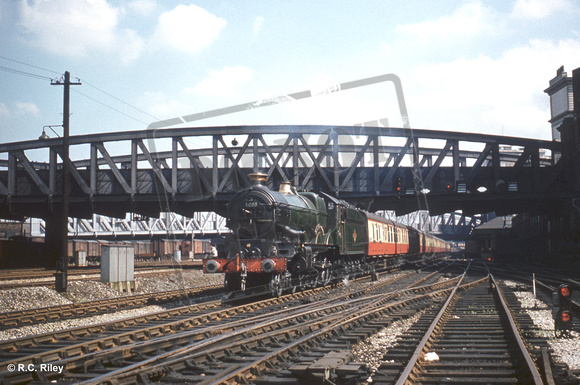 Worcester's Castle 4088 Dartmouth Castle departs from Paddington with the 1.45pm to Worcester on 30th August 1958.

Peter Kerslake adds "In typical immaculate condition for a Worcester Top Link engine, is under Ranelagh Bridge with Westbourne Bridge in the background, one of Richard Riley's favoured locations.
A Plymouth Laira engine a few years earlier, 4088 was one of 65, mainly older Castles, which underwent extensive rebuilding by Swindon between late 1957 and the end of 1961 to improve their performance on such duties such as this, but sadly many did not suvive long enough to justify the work carried out.

4088 was transferred to Swindon shed in February 1961 and to Bristol in late 1963 and was condemned from St Philips Marsh in May 1964."
R.C. Riley
Powered by ZENFOLIO User Agreement
Cancel
Continue