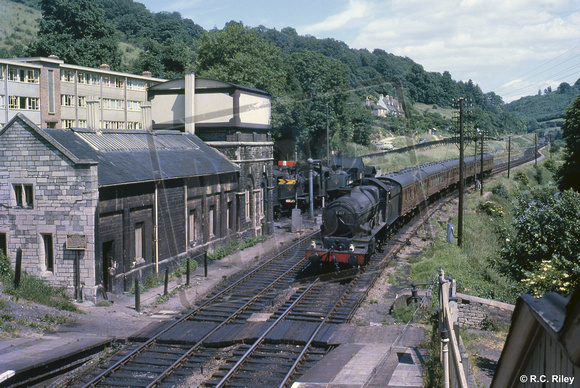 Castle 5017 The Gloucestershire Regiment 28th 61st which had been at Gloucester Horton Road since October 1951 was in its final summer in service and was withdrawn in September 1962.

Peter Kerslake says "Gloucester Horton Road's 5017 was usually kept in pristine condition but standards seem to have slipped as it drops down Sapperton Bank through Brimscombe at the foot of the incline.
The former Broad Gauge engine shed with its water tank high above the entrance has a couple of large Prairie tanks awaiting their next call to duty banking a freight to the summit. The shed was officially designated a sub-shed of Gloucester Horton Road."
© R.C. Riley
Powered by ZENFOLIO User Agreement
Cancel
Continue