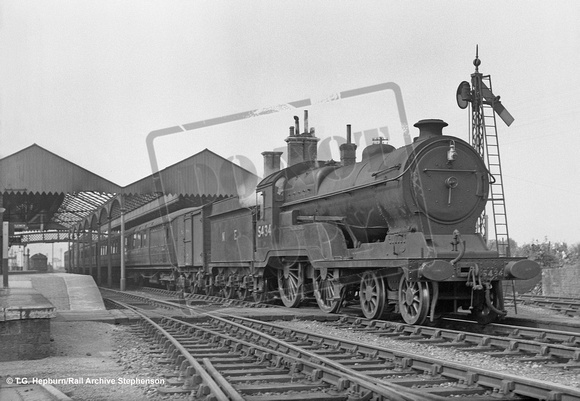 GCR D10 4-4-0 No 5434 The Earl of Kerry leaves Firsby with a Lincoln to Skegness train on July 11, 1946.
Peter Kerslake says "5434 was one of the original class of D10 "Directors", ten of which were built between 1913 and 1914 and initially allocated to Neasden depot. It was the sixth of its class, built in November 1913 and withdrawn in August 1953.
Later becoming 62650 to 62659 all the D10s were withdrawn between March 1953 and October 1955. The most noticeable difference in design between this class and the later D11 "Improved Directors" was the two cab windows of the D11s, but that apart the two classes were virtually identical in outward appearance."
Photo: T.G. Hepburn/Rail Archive Stephenson
T.G. Hepburn/Rail Archive Stephenson
Powered by ZENFOLIO User Agreement
Cancel
Continue