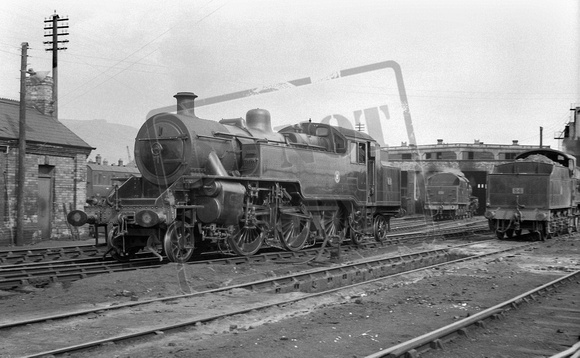 The eighteen Northern Counties Committee Ivatt 'WT' class 2-6-4 Tanks were lovingly nicknamed 'Jeeps'. Here is No.7 at Belfast York Road MPD in May 1957. The LMS lineage is obvious as they were only a minor modification of George Ivatt's '4P' 2-6-4 Tanks built for the LMS. Thus the 'WTs' were all built at Derby (No.7 in September 1946) because the LMS was the NCCs parent company. No.7 was withdrawn in June 1968 and the 'Jeeps' would be the last steam locomotives to work in the United Kingdom, some lasting into 1970. Their wheel and handle smokebox door fastening was an elegant touch I always thought!
n.b. Apologies for any errors in this description. Irish railways are not my strong point but I have tried to provide correct details where known!