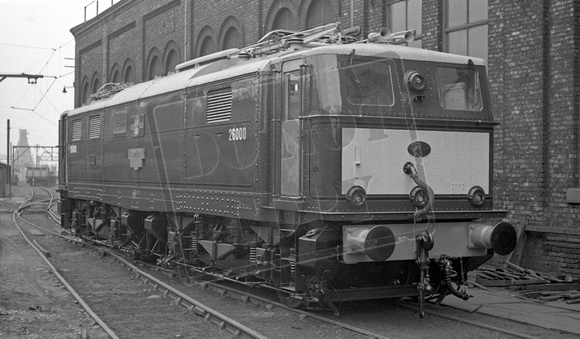 Note the differently painted door presumably varnished wood and small yellow ends.
Peter Kerslake says " The pioneer clas EM 1 , still bearing its " Tommy " nameplates in this splendid view , displays the absence of side cab windows and smaller front windows which were differences between this locomotive and the remainder of the class .
The position of the buffers and drawgear on the bogies , rather than being attached to the main body of the locomotive , is also apparent in this view , , a feature not incorporated in the design of the later class EM2 locomotives .
By positioning the buffers and drawgear away from the main body it had been intended to reduce the stresses and impacts sustained by the main bodywork from frequent double headed workings and banking duties undertaken whilst in service "
Powered by ZENFOLIO User Agreement
Cancel
Continue