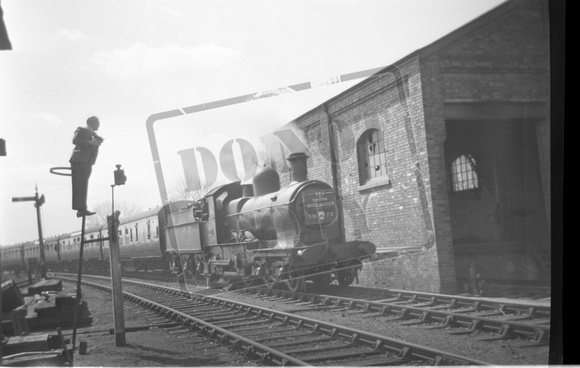 Fom his vantage point at the top of the single line token exchange post, the enthusiast gets his shot of 9015 entering Hook Norton station with the REC 'South Midlander' railtour on 24/4/1955. Beyond the signal can be seen the exit from the three track sidings and loop behind the station.

Whilst by far the majority of the twenty two surviving little " Dukedogs " were to be found working on the Cambrian lines in 1956 this one was , for some obscure reason , allocated to Oxford and is seen here on an Enthusiasts ' Special on the 24th . April , 1955 .
Built from 1936 and incorporating frames from withdrawn " Bulldogs " and cabs , boilers and fittings from similarly condemned " Duke " it had been Mr. Collett's intention for his design to bear the same original " Duke " nameplates but those in authority at Paddington decreed that his class were to be named after living noble Earls instead .
That idea turned out to be a bad one , however , as certain of the gentlemen concerned raised objections and the nameplates carried by the first twelve " Dukedogs " were swiftly transferred to the new " Castles " not long outshopped from Swindon , and 9015 seen here never carried its intended " Earl of Clancarty " nameplates which went to " Castle " 5058 instead in late 1937.
The later members of the " Dukedog " class accordingly ran nameless throughout their working lives.
Powered by ZENFOLIO User Agreement
Cancel
Continue