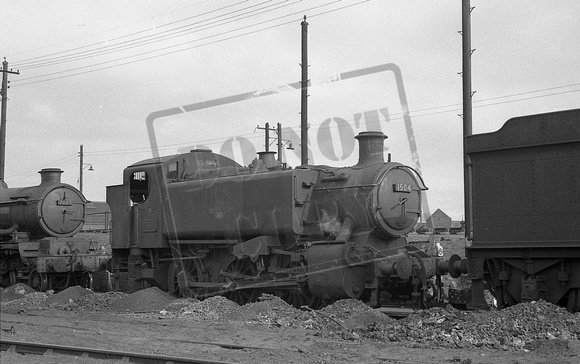 That's a rather run down looking " Clun Castle " behind 1504 , seen here at Old Oak Common in 1962, its home since new in 1949, and amidst all the accumulated ash the outside Walschaerts shows well in this view , a feature which made the little " 1500 's " easy to maintain , the design possibly copied by Hawksworth from the Southern's " USA " class of imported tank engines which bear a very similar comparison to this later Great Western design.
Not built or intended for speed , with the substantial front overhang resulting in unsteady behaviour at anything in excess of a moderate pace , the " 1500 's " were , however , strong little engines , their heavy weight of just over 58 tons providing good adhesion especially when on empty stock duties between Old Oak carriage sidings and Paddington , the role for which those at Old Oak will be so well remembered.
© Rail-Online
Powered by ZENFOLIO User Agreement
Cancel
Continue