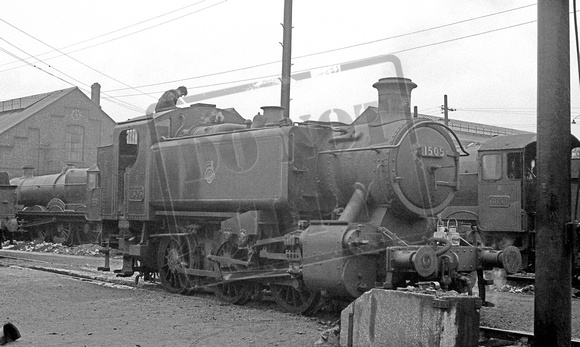 Peter Kerslake says "Hawksworth designed 1505 had been the sixth member of her class allocated from new in the Summer of 1949 to here at Old Oak Common, intended for use on empty stock workings between the nearby carriage and stock sidings and the terminus at Paddington, duties which they performed so well until two were later moved to Didcot and Southall before the first withdrawal came with 1509 being condemned from Newport Ebbw Junction in August of 1959.
Following the withdrawal and subsequent sale of 1501, 1502 and 1509 to the National Coal Board in 1961 these three of the class of just ten were used at their Coventry colliery until 1970 when they were sold to the Warwickshire Railway Society with just 1501 making it into preservation and happily still with us today."
© Rail-Online
Powered by ZENFOLIO User Agreement
Cancel
Continue