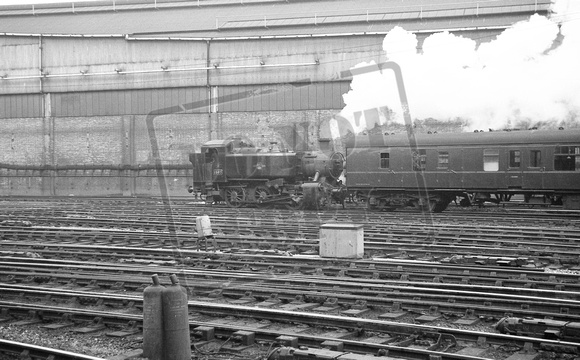 Doing the job which the class of ten of Hawksworth's "1500 " Pannier Tanks were intended , 1507 draws a set of empty stock out from one of Paddington's arrival platforms , bound for the Old Oak sidings a mile or so away .
Designed to provide the maximum period in service , the use of the Walschaerts outside valve gear allowed " oiling up " from alongside the engine and obviated the need for running over a pit whilst on shed as was the case with locomotives with inside valve gear , and similarities in the design with the " USA " class of Southern Region locomotives is clear .
The National Coal Board purchased 1509 for use in its Coventry colliery from the Western Region in 1959 , followed in 1961 by adding 1501 and 1502 , the three engines seeing service there until late 1969 , following which although 1502 and 1509 were disposed of , fortunately 1501 was saved for preservation and is now on the Severn Valley Railway.
© Rail-Online
Powered by ZENFOLIO User Agreement
Cancel
Continue