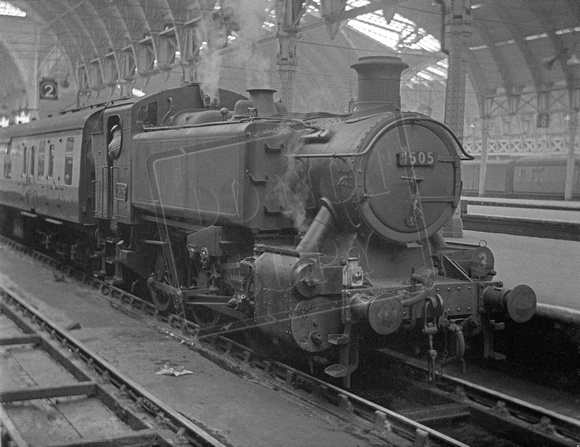 Clean enough to see the lining for once

A good close shot of Hawksworth's little 1505 which shows that , as they spent so much time in the publc gaze whilst at Paddington's buffer stops , they were treated to a lined livery , although 1505 could do with an oily rag to show that feature to advantage on this day .
The first to be withdrawn in 1962 this one was not one of the three purchased by the National Coal Board , with 1509 being sold to that Authority in 1959 , followed by 1501 and 1502 two years later , all three retaining their Western cabside numberplates throughout their time at Coventry Colliery .
Popular with their footplate crews , the class were easy to maintain , their outside valve gear , so unfamiliar in Great Western designs , permitting easy acces for manual lubrication , but they were " rough riders " at anything in excess of a moderate speed , their main attribute , especially those at Old Oak Common , being their capability in handling heavy sets of empty stock to and from Paddington from the carriage sidings at Old Oak Common.
© Rail-Online
Powered by ZENFOLIO User Agreement
Cancel
Continue