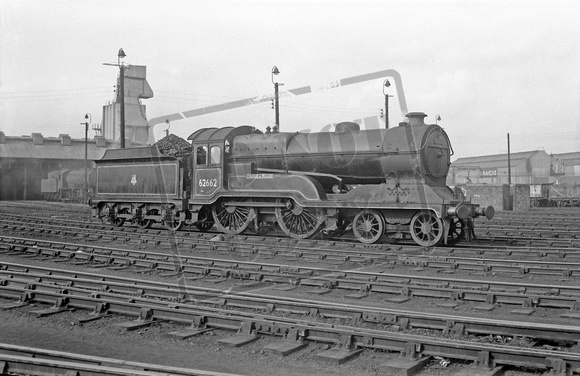 Small size cycling lion, originally it had a large one.
Peter Kerslake says "A nice image of the third class D11 'Improved Director' 62662 Prince of Wales at Sheffield Darnall in the 1950s, probably after June 1958 when it moved there from Northwich, which had five of this class on its books during 1956.
Developed from Robinson's original D10 'Director' class the eleven 'Improved Directors' came into service with the pioneer 62660 Butler Henderson entering service at the end of 1919, twenty four more being built by the LNER in 1924 with a loading gauge permitting their use over former North British lines.
The class saw service over a wide area in 1956 with no less than fourteen at Glasgow Eastfield, and ten at Edinburgh Haymarket with the remainder at Lincoln, Northwich, Trafford Park and Immingham."
© Rail-Online
Powered by ZENFOLIO User Agreement
Cancel
Continue