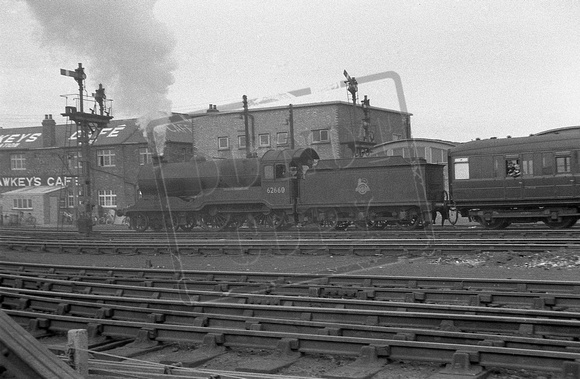 Allocated to Sheffield ( Darnall ) at the date of this view in 1958 , 62660, "Butler Henderson" had enjoyed an illustrious career going back to its introduction into service with the Great Central Railway many years earlier in December 1919 when, resplendent in a livery of green and red it had been initially allocated to Neasden shed in London. It remained there until 1925 when a move to Gorton and thereafter Leeds Copley Hill took place although it was back at Neasden again from 1932 for a period of six years.
During the mid-1950s this engine and a number of other "Directors" were to be found at 40A, Lincoln from where they worked express passenger duties to Derby and Nottingham .
Happily once more running in its splendid GCR livery "Butler Henderson" can be found on the Great Central heritage line at Loughborough where it was restored during the late 1970s and early 1980s .
© Rail-Online
Powered by ZENFOLIO User Agreement
Cancel
Continue