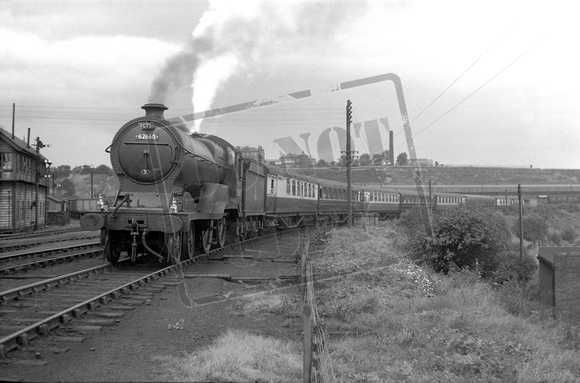 On RCTS South Yorks Rail Tour passing Whithams Sidings signal box on the L&YR Wakefield Fork between Turners Lane Junction and Calder Bridge Junction. Above the tender can be seen Wakefield General Hospital on Park Hill and Wakefield Carriage Sheds beyond the train. Although referred to as Withams Sidings in most recently published images, it is shown as Whithams Sidings on all OS maps & Signalling Record Society documents.
Peter Kerslake says "A superb shot of ex Great Central 'Director' 62660, Butler Henderson, dated from September 1958 two years before the engine's withdrawal from service .
I made a special trip from Boston to Lincoln sometime between July and December of 1955 in the hope of recording on film one of the class on their home shed, and was lucky enough to photograph Butler Henderson there that day , looking very grubby and uncared for , apparently not unusual at that period in time.
In its glory days the GCR livery of green and red had been carried by this class, and following restoration at Loughborough in the late 1960s and early 1970s that same livery was reapplied, the engine initially becoming a static exhibit at Clapham Transport Museum before a move to the National Railway Museum at York. Now 62660 is happily back in running order on the heritage Great Central Railway. During its working life 62660 had spent time at Neasden, Gorton, Leeds Copley Hill, Immingham, Manchester Trafford Park, Lincoln and finally Sheffield Darnall from where it was withdrawn in October 1960.
Powered by ZENFOLIO User Agreement
Cancel
Continue