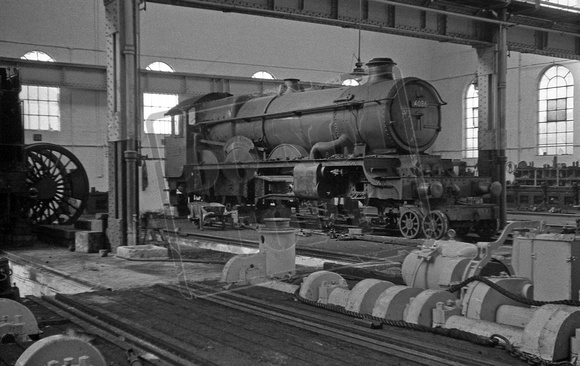 On an unofficial visit to Newton Abbot Shed and Works on the 29th. September , 1956 myself and my fellow enthusiasts were surprised to see our own Laira shed's 4086 , " Builth Castle " in the Works , devoid of all its wheels and my note made at the time refers to Swindon being " too full " , but I do not recall where that piece of information came from !
In the following year 4086 was lost to Laira , the engine going to Swindon , and thereafter to Reading and Cardiff Canton , being withdrawn at Reading again in April , 1962.
In their late years even these early " Castles " and members of the initial batch were given a new lease of life with improved draughting , mechanical lubrication and other refinements allowing them to work prinicpal passenger expresses , although not on their former territory as the Diesels displaced them .
Notice how light and clean this Works appears to be , with the traverser in the foreground
Powered by ZENFOLIO User Agreement
Cancel
Continue