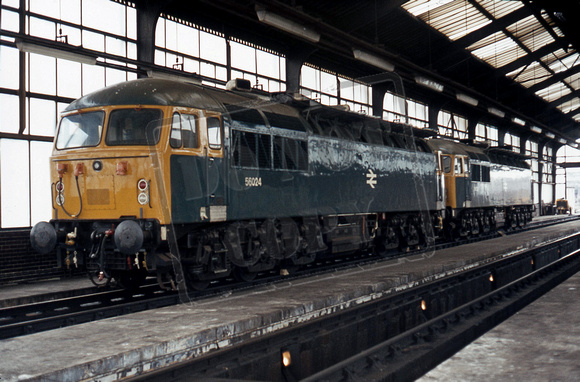 This looked like Shirebrook to me as the shed had 2 tracks and no raised platforms. But further research by Vic Smith found some structural differences. Romanian 56's were only working off Tinsley, Shirebook and Barrow Hill when brand new and it is none of these. However a further look in the OPC's D&E on Shed Vol 2 confirms this is the DMU shed at Sheffield Darnall -obviously used for delivery checks as I remember Tinsley and Barrow Hill were over-run with comissioning problems on the new Romanian built locos.

Peter Hall adds:'The other locomotive is almost certainly 56023. 56023+56024 arrived at Tinsley from Harwich on 1st April 1977 and very shortly after were moved to Darnall for storage prior to commissioning. Thus, the picture was probably taken April or May 1977.'
© Rail-Online
Powered by ZENFOLIO User Agreement
Cancel
Continue