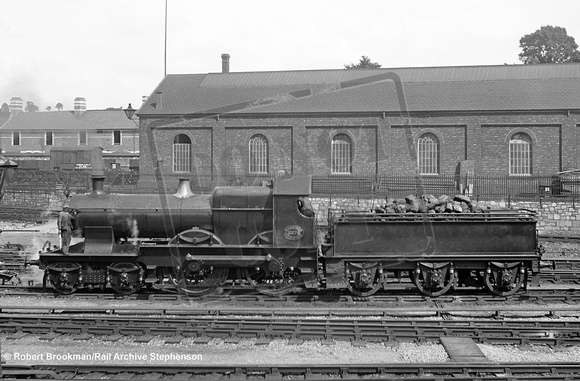 GWR Atbara class 4-4-0 No 3378 Khartoum at Newton Abbot in c1902.
Peter Kerslake says "With part of Newton Abbot Motive Power Depot in the background there are some massive lumps of coal to be broken up in the tender. 3378 has yet to receive the taper boiler fitted in October 1909, so is in original condition in this view.
The driver is doing some "oiling up". When first introduced in 1900 the forty members of the class were initially rostered to principal express duties working away from Paddington to Bristol, Exeter, Cardiff and Wolverhampton before being displaced by the "City" and "County" class locomotives resulting in the "Atbaras" being relegated to more mundane secondary and cross country services. The first class withdrawals took place in 1927 and the last soldiered on until early 1931.
It is interesting that the imposing Depot building seen here was only just in 2019 sadly earmarked for demolition."
Photo: Robert Brookman/Rail Archive Stephenson
Robert Brookman/Rail Archive Stephenson
Powered by ZENFOLIO User Agreement
Cancel
Continue