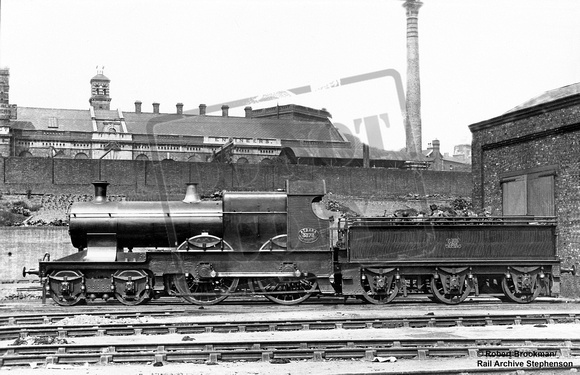 GWR Atbara 4-4-0 No 3373 Atbara at Westbourne Park shed in c1902.
Peter Kerslake says "Westbourne Park locomotive depot on the outskirts of Paddington station dated back to the 1800's but was demolished in 1906 to make way for Old Oak Common Motive Power Depot which opened on the same site that year, the site of the former depot being then covered by trackwork and loops leading into, and out from the new facility. There was a canal behind the original depot and that imposing engineering building is most likely the former Paddington Workhouse.
3373 "Atbara" is on the original shed sometime between April 1900 and June 1904 when it was fitted with a taper boiler, the engine achieving distinction when it was named "Royal Sovereign" in order to work Queen Victoria's funeral train on the 2nd February1901. Subsequently, in late 1912 it was renumbered 4120 and remained in service until condemned in September 1929 from its then home at Leamington Spa."
Photo: Robert Brookman/Rail Archive Stephenson
Robert Brookman/Rail Archive Stephenson
Powered by ZENFOLIO User Agreement
Cancel
Continue