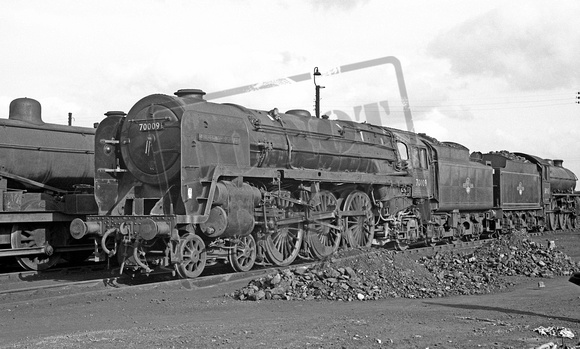 Peter Kerslake says "70009 Alfred the Great newly delivered to Norwich in May 1951 had shortly afterwards helped out at Nine Elms on the Southern Region from June until October that same year when the Southern were having problems with their "Merchant Navy" class.
When diesels took over on the former Great Eastern main line between Liverpool Street and North Norfolk in late 1961 this engine, together with all its companions at Norwich, were sent to the freight depot at March in Cambrifgeshire in a bid to find work for them.
This was a badly thought out move however, and with little or no such work they were immediately left in the open, stored out of use, although seven had been more fortunate in being moved on to Immingham, where they were warmly welcomed, performing well on the express passenger and fish workings between Lincolnshire and Kings Cross.
70009 went to Carlisle Kingmoor in December 1963, narrowly avoiding being condmned, and remained there until its last days in January 1967."
Powered by ZENFOLIO User Agreement
Cancel
Continue