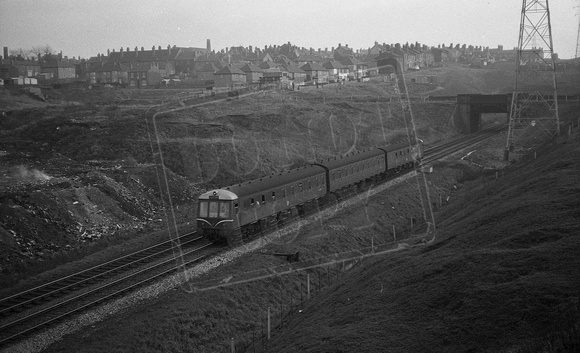 David J. Hayes says "The service is approaching Wednesbury (Central) from the Birmingham (Snow Hill) direction, having just emerged from Hill Top Tunnel, which is situated just beyond the overbridge. The line itself once formed part of the GWR's main line route from London Paddington to Birkenhead Woodside, but lost its main line passenger status in March 1967. It finally closed to passenger services in March 1972, by which date consisted of a peak-hour shuttle between Birmingham Snow Hill and Wolverhampton Low Level.

The section of line seen here, however, remained in use from Wednesbury for freight traffic to the Swan Village coal depot at Black Lake, which was located just the other side of Hill Top Tunnel. The line from Wednesbury to the coal depot itself eventually closed in December 1981, but was re-opened in May 1999 when it found a new lease of life as part the Midland Metro route between Birmingham Snow Hill and Wolverhampton St. George's".
© Rail-Online
Powered by ZENFOLIO User Agreement
Cancel
Continue