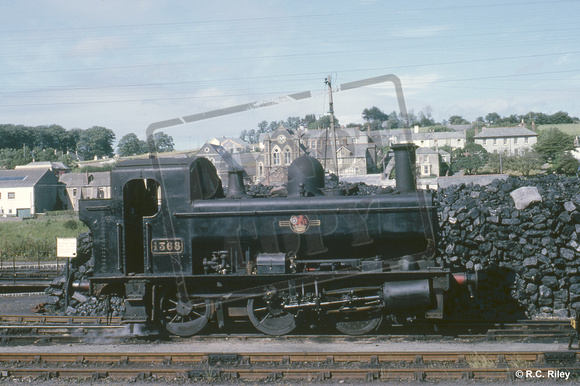 One of the 1366 panniers that replaced the Beattie well tanks on the china clay workings and station pilot duties at Wadebridge. No.1368 was there on 21st June 1962.

Peter Kerslake adds "1368 was built in February 1934 and was one of the five of the six members of the 1366 class 0-6-0PTs retained at Swindon for use in the Works, mainly moving stock to and from the Carriage and Wagon shops. It was transferred to Weymouth in February 1947 to work passenger and freight through Weymouth's narrow and congested streets between the busy dockside and station.
Following trials with 1368 at Wadebridge in April and May 1962 it was joined there by 1367 and 1369, replacing the three Beattie Well Tanks on the china clay workings. The trio lasted in service there until November 1964 when they were condemned although 1369 was preserved.
© R,C. Riley
Powered by ZENFOLIO User Agreement
Cancel
Continue