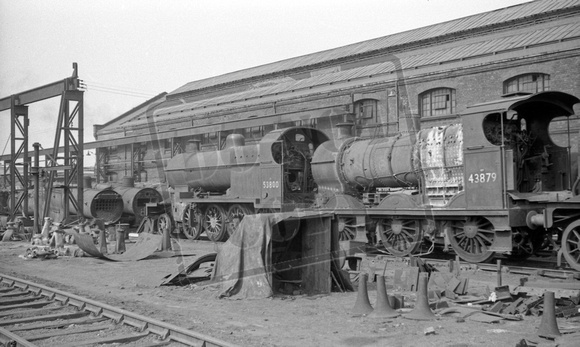 Geoff Moore says'this is the area at the top end of Derby Works. near what was called Spike island. Locos were disposed of here. Pride Park and the home of Derby County now occupy this area."

And Pater Kerslake "Introduced by Mr. Fowler in 1914 specifically for use on freight traffic on the Somerset and Dorset network for which the Midland Railway had responsibility in providing motive power 53800 was the first of her class of eleven , and also the first to be withdrawn in 1959 .
This view shows 53800 in the process of being dismantled so would , I suggest , date from 1959 , with the last of the class remaining in traffic on the Somerset and Dorset until September of 1964 when 53807 was condemned .
Despite being classified as " 7 F ", the Bath allocated 2-8-0's were also used throughout their working lives on both local and long distance passenger traffic over the undulating route between Bath and down to Poole , especially on Summer Saturdays , as well as working freights to Avonmouth , but the need for Double Heading restricted their use somewhat during busy periods"
Powered by ZENFOLIO User Agreement
Cancel
Continue