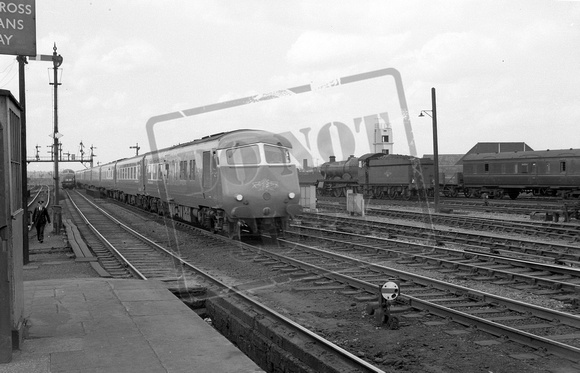 This is the western end of Reading General with one of the " Bristol Pullman " eight car Blue Pullman sets coming through , Paddington bound from Temple Meads .
The note has this as a " Special Train " , but the normal working schedule for the " Bristol Pullman , introduced as the first of the Western Region's Blue Pullman services on the 12th . September , 1960 , comprised an early morning run to Paddington from Bristol Temple Meads with a late afternoon return catering for businessmen wishing to spend a whole day in London .
As with all the other Blue Pullmans , there was an additional " Filling In " run from Paddington with this service running via Bath down to Bristol and returning to the Capital in time for the evening homeward duty , the sets thereby running some 470 miles daily
Powered by a 1000 h.p. Diesel unit , each of the two power cars were distinctive in design although in later years the addition of jump leads for multiple unit workings did little to enhance their appearance .
High expectations for the units were sadly not met in service , however , with problems being encountered with the bogies together with reports by crewmen of poor acceleration and an apparent lack of power .
All the Western Region's " Blue Pullmans " were allocated to Old Oak Common , the Western's sets being eight car mixed First and Second class units whilst those on the Midland Region were smaller six coach , all First Class units.
Powered by ZENFOLIO User Agreement
Cancel
Continue