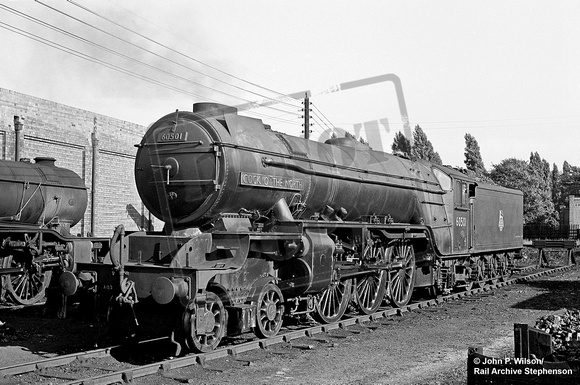 Peter Kerslake says "A splendid portrait of Thompson A 2/2 "Cock o' The North" at Grantham in mid 1952, one of the class of just six 1943 and 1944 rebuilds from Sir Nigel's class "P2" design dating from 1934.
Although retaining a shortened version of the original "P2" boilers the original leading driving wheels of the "P2's were removed with new front frames being welded in and the cylinders were moved back as shown in this view.
Initially allocated to depots north of the border the class were later housed at York and Peterborough in the post war years and although not viewed favourably by their footplate crews due to their reduced weight over their driving wheels making them renowned for slipping badly when starting the class were capable of attaining a good turn of speed once they were on the move.
60501 seen here had entered service in her rebuilt from Doncaster Works in September of 1944 and lasted until February of 1960, her sisters 60503 "Lord President" and 60505 "Thane of Fife" having both been withdrawn in November of 1959, whilst the last to survive until July of 1961 was 60502 "Earl Marishal".