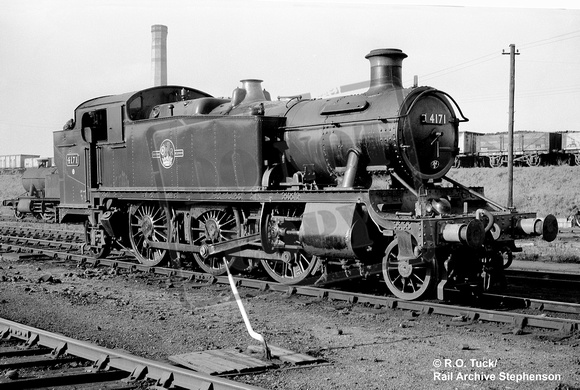 Peter Kerslake says "Owing its heritage to the earlier "3100"series of 2-6-2 tank engines which dated as far back as 1904 this later example in the shape of 4171 emerged from Swindon works in late 1948 or early 1949 , the series being classified as the "5101" series and distinctive from earlier examples by having curved drop ends to the front frames together with a lower cab roof.
With a capacity of four tons of coal and 2000 gallons of water these later examples were ideally suited to work a variety of both passenger and freight rosters over a wide area, especially on semi fast passenger duties, with a number being utilised on banking duties as well.
Just to confuse things, the later series from 1935 were numbered between 4100 to 4179, whilst their predecessors, earlier built from 1929 to 1934 were numbered 5101 to 5199."